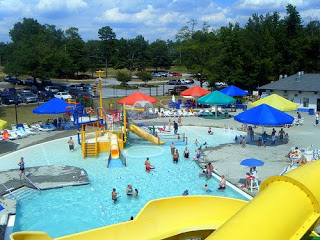 Missy Johnson of Simpsonville has surveyed the Discovery Island water park, and she takes her hat off to Greenville County's recreation officials for building it.

She likes the snazzy venues, such as slides for kids to glide from three stories above the park to a series of small pools. Its organized chaos makes the kids shriek with happiness.

"It's great entertainment for the Simpsonville-Mauldin area," she said.

There's just a small problem, she said Saturday. "It definitely needs to be bigger."

She brought her daughter Erika and a friend, Victoria, both 12.

While the wait Saturday was an average 10 minutes in the midday heat, kids and their parents waited in lines for more than an hour two Saturdays ago.

"We only waited about 10 to 12 minutes," Johnson said this weekend.

Johnson said the park is so successful it's drawing people from surrounding areas, compounding overcrowding.

At 3 p.m. Saturday, the park was at its capacity. The wait to get in lasted about 15 minutes. Joy Anderson said she brought her niece, Emma, age 3, to Discovery Island, but her wait wasn't tedious.

"You don't wait for too long," she said of their first visit.

Families who arrange parties and other prearranged gatherings are not required to wait in line.

Discovery staffers said there were more visitors in the park earlier Saturday.

"It's really busy every day," co-worker Joy Strickler said. "The more people hear about it, the busier it will become."

Dan Rodgerson, head of the Greenville County Recreation District, could not be reached for comment about future plans for the water park.

Scheimann said planners expect that families who don't go to the beach or a lake July Fourth weekend might come to the water park.

"We love water parks," she said. "We just got back from the beach."

Linda Medina of Mauldin said a few weeks ago on a Saturday it took her a while to find the park. She was leaving after she and her granddaughter spent a few hours at the park.

Medina said she tried to find the park a few weeks ago but couldn't. That weekend, there were about 175 people waiting in line to get in. A sign near the entrance said officials would not be letting anybody in until some swimmers left.

Ernestine Hill left the water park in frustration after waiting a short while in the hot sun with three kids.

"I'm going to buy these kids a swimming pool," Hill said, the stress obvious on her face.

Most people estimated the waiting to get in that Saturday at about an hour.

One couple with three children waited briefly before heading back to their cars.

Rick and Cheryl Wardlaw said it was the first time she brought her grandchildren to the water park.

"It was a new park to try with the grandkids," Cheryl Wardlaw said. "The price is real good." She said she and her co-workers had been talking about the park on her job.

Rick Wardlaw said he wanted to leave after learning of their hourlong wait a few weeks ago.

Shawn Smith walked up to the park with his three children and turned right around to leave.

"I'm not going to stand in line here," he said. Smith said the water park was near his home, and closer than Six Flags park in Georgia.

He said he was taking his kids to another water park near White Horse Road.

Carmen Wright said she enjoyed the park, but it was way too small.

"They should have made it bigger, considering how big Greenville is," she said.

Lisa Whitney said she and her daughter, age 7, enjoyed the park. They didn't have to stand in line because her daughter was attending a birthday party. The hosts, she said, made reservations.

"It was my first time and it was wonderful," she said while heading to her minivan.

Sandra Fulmer said she brought her son Trevor, and his friend, Scottie, both 10, to the park.

"It's great entertainment for the Simpsonville-Mauldin area. It definitely needs to be bigger." -- Missy Johnson, Simpsonville

Waiting their turn: Visitors to Discovery Island water park stand in line for a chance to take the plunge down the water chute.